New Year’s Day in Pasadena California is known for it’s Rose Parade and its annual American college football game played at the Rose Bowl, both part of the Tournament of Roses Celebration.  And today, Rose Bowl welcomes Wisconsin Badgers and TCU (Texan Christian University) Horned Frogs who will be fighting for the 97th annual Rose Bowl Championship Title. 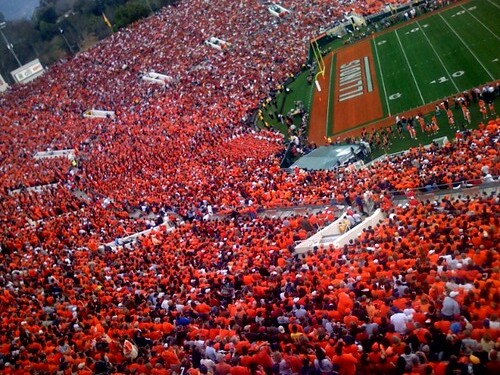 The Rose Bowl is nicknamed “The Granddaddy of Them All” because it is the oldest bowl game, and because this game pays out the most money to the football program that wins the title.  Rose Parade organizers added the football game back in 1902.  The humiliation of Stanford by University of Michigan did not sit so well with some and that was the end of that idea until 1916 when football returned to the Rose Bowl with a vengeance. Since 1945, it has been the highest attended college football bowl game. Photo by The Tournament of Roses Association

Here is a little breakdown of what the Rose Bowl game means this year.

Usually, the Rose Bowl Consists of a Pac 10 Team playing a Big 10 Team. This year, because the Pac 10 undefeated team the Oregon Ducks ( Boo! Sorry, you’re dealing with a Trojan fan here. ;-)) is heading to the Tostito’s Fiesta Bowl to play for the National Championship, there was a vacancy from the Pac 10.

Normally the next team below, the Pac-10 champion, would go to the Rose Bowl, but because of Oregon going to the BCS championship, the Rose Bowl is obligated to take the highest ranked team by the BCS.

Here is where the 12-0 TCU Horned Frogs come in to play and get a their first trip to the “Granddaddy of them all”.

Last year, there was an apparent invasion of the Crimson Tide in Pasadena.  Every year the city hosts The Rose Bowl Game on New Year’s Day and every 4 years they host the BCS Championship Game played at the Rose Bowl.  Don’t be confused my football novices, these are 2 different games.

This year the Horned Frogs are coming to town.  I’m expecting a sea of purple everywhere I turn. As we mentioned earlier, this is the first trip ever for TCU to the Rose Bowl and they are coming to make a statement!

The Wisconsin Badgers have played in 6 Rose Bowl games, taking home 3 victories, the last in 1994.

Who will take home the win this year? TCU with the pristine 12-0 record, or Wisconsin 11-1 and with all their pride on the line.

Rose Bowl tickets always sell out early. However, many a family tradition includes gathering with family and friends and rooting for your favorite team at home.

Who do you think will win the Rose Bowl this year?

So… on day 233 of 365 Things To Do In Pasadena, we invite you to enjoy the game and may your favorite team win!