365 Things To Do continues with our historic home tour of Pasadena and its neighborhoods and brings us to Lower Arroyo Seco and the San Rafael area of Pasadena. 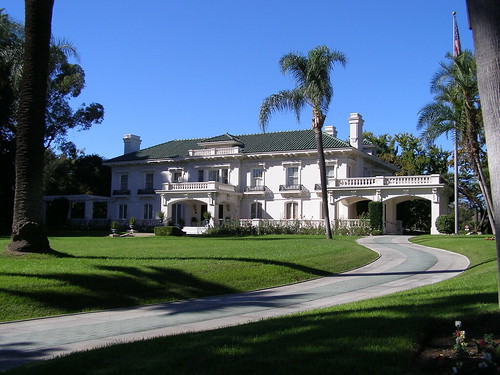 In 1940s, the housing shortage in Pasadena led to the development of the San Rafael area and new residences were built that reflected the upper middle class and very wealthy families.

We have talked about the Colorado Street Bridge before.  Many a party has taken place there and unfortunately quite a few folks took their lives there by diving off it.  However, it is still one of the most graceful and beautiful bridges in the area.  This curving bridge is made out of reinforced concrete.  It was restored in the 1990s and spans nearly 1,500 feet.  It connects Old Pasadena to the San Rafael Hills and Eagle Rock.

The federal government acquired this Sylvanus Marston designed resort hotel to use as a military hospital. It is now used as the Ninth Circuit Court of Appeals.

Designed by Myron Hunt at no charge, this structure was built using Arroyo stone and lumber from bicycle tracks built at the Rose Bowl for the 1932 Olympics.

Ernest Batchelder is a famed artisan known around Pasadena for his beautiful decorative tiles around the fireplaces. These tiles became emblematic of the Arts & Crafts movement. Batchelder’s kiln remains in the backyard of this lovely home, and if you look carefully, you can see examples of his tile work from the street.

This ornate mansion built for the chewing-gum mogul William Wrigley, who controlled the development of Catalina island. It is now home to Pasadena’s Tournament of Roses.

Do you have a favorite historic home in Lower Arroyo Seco or San Rafael?