By the time y’all read this article we should all know who was selected to be the Queen of the 2016 Pasadena Tournament of Roses Parade & Rose Bowl (PTOR).  I will give you my guess for Queen later, which I usually Fail.  But, who’s your guess?

But 1st we need a Royal Court to pick from.  The names of the Royal Court from which the Queen will be picked. 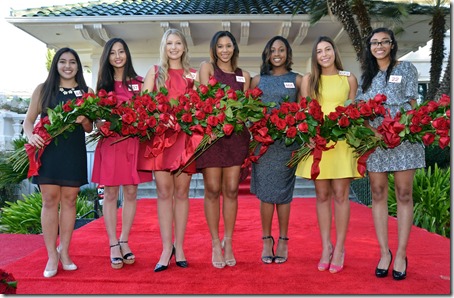 Now a few, just a few believe me, of my shots from the media event earlier this month to announce the new 2016 Royal Court at Tournament of Roses HQ.

A few of the 2015 Rose Princesses attended and were announced to the gathered masses. They will congratulate the new Royal Court with a bouquet of Roses. The Princess on the right – Veronica Mejia – her family has a long history in Pasadena and they own a couple of Mexican food restaurants in the Pasadena area (Ranchero).  She has been helpful with giving menu recommendations.  Ck it out. After the 39 finalists were announced, the 2016 president of the PTOR makes his appearance.  Edward Morales Chairman of the Queen & Royal Ct committee, left, hands to PTOR President Mike Matthiessen envelopes with the 7 names of the finalists selected to the Royal Court.  The lucky girl called comes down & the outgoing Royal Court Princesses hand each girl of the new Royal Court a bouquet of Roses in congratulations! A great couple representing Pasadena and the PTOR this year: President Mike Matthiessen and his wife. The president will stand out from the other white-suit members by wearing the presidents red suit. Chairman of the Queen & Royal Court committee, Edward Morales. About every 2-3 years the white-suiters switch to a new committee which covers another part of putting on the Rose Parade and Rose Bowl game. If they’ve been a member “long-enough,” and have some luck on their side, they will be among the lucky few to reach the top of the PTOR for a year! Christina Pascucci, KTLA-5. “Hey, Christina, “Will you accept this Rose?”, I said to the USC grad! Well, you can see she’s holding the Rose don’t you! (Soon we will have another reporter, and former Rose Princess,  from USC!)  As great a reporter as Christina is, she’s an even better person. “Hey, will you send me a copy of these photos? “, she asked. I sent them to her & her response… “Awesome!” Ok, that was then. This is now. Which of these 7 Rosey Princesses will be named The Queen of The 2016 Tournament of Roses??  I fail miserably at guessing the Queen. In recent years I was only right on with Queen Vanessa Manjarrez.  Vanessa is now studying at a northeast university. Now, it’s time for my “educated”, or more-likely, wild guess: The 2016 Queen of the PTOR will be either Regina Shaklan or Donaly Marquez.  “Two guesses”, you say? Hey, I could take six guesses and probably get it wrong.

Enough of me! It’s YOUR turn, my more intelligent guessers! Who’s do think will be named 2016 Queen??