Whoah…. what a day this Tuesday has been.  So… it’s almost 9 pm and I had a very, very busy day full of appointments.  Just got home and realized that day 110 of 365 Things To Do In Pasadena has not been written nor has it been posted. 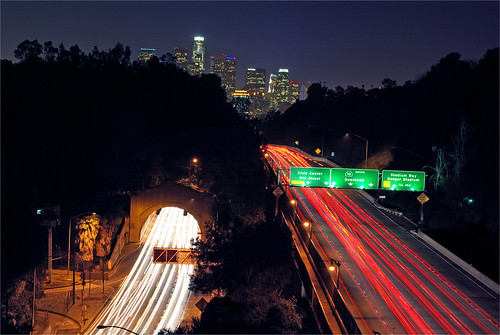 … that our very own Pasadena Freeway is the very first freeway built in California.  It was opened in 1940 and is also notable for representing the transitional phase between early parkways and modern freeways.

Here’s what Wikipedia has to say:

It conformed to modern standards when it was built, but now it’s regarded as a dangerous, narrow, outdated roadway. A 1953 extension brought the south end to the Four Level Interchange in downtown Los Angeles and a connection with the rest of the freeway system.

The road remains largely as it was on opening day, though the plants in its median have given way to a steel guard rail, and it now carries the designation State Route 110, not historic U.S. Route 66. Between 1954 and 2010, it was officially designated the Pasadena Freeway. In 2010, as part of plans to revitalize its scenic value and improve safety, Caltrans renamed the roadway back to its original name. All the bridges built during parkway construction remain, as do four older bridges that crossed the Arroyo Seco before the 1930s. The Arroyo Seco Parkway is designated a State Scenic Highway, National Civil Engineering Landmark, and National Scenic Byway.

Now… I’ve learned to drive on the 110 freeway.  And, going from 0 miles per hour to 55 miles per hour from a dead stop doesn’t phase me at all.  Maybe that’s the true sign of a Pasadenean!  However, friends visiting from other areas find this freeway challenging.

I’ve also learned to drive in the middle lane to ensure that the sharp curves in the stretch between Via Marisol and Figueroa don’t bring any unexpected surprises and there have been a few in the past that were close calls.

So… if you want to experience what a 1940 freeway feels like, take a drive down the Pasadena (110) Freeway.  Pay close attention to the Art Deco Tunnels and take in the Arroyo Seco scenic vistas.   You can stop by the Dodger’s Stadium, Heritage Square Museum, visit Elysian Park and enjoy a Peking Duck in China Town – all easy stops off of the Pasadena Freeway!